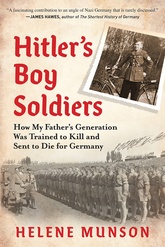 Hitler's Boy Soldiers: How My Father's Generation Was Trained To Kill And Sent To Die For Germany

Children of the Third Reich

When Helene Munson finally reads a wartime journal written by her father, Hans Dunker, she discovers secrets he kept buried for seven decades. During World War II, the Nazis trained some three hundred thousand German children to fight--and die--for Hitler. Hans was just one of those boy soldiers. Sent to an elite school for the gifted at nine years old, he found himself in the grip of a system that substituted dummy grenades for Frisbees. By age seventeen, Hans had shot down Allied pilots with antiaircraft artillery.

As Helene translates Hans’s journal and walks his path of suffering and redemption, she uncovers the lost history of an entire generation brainwashed by the Third Reich’s school system and funneled into the Hitler Youth.