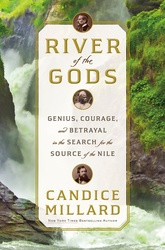 River Of The Gods: Genius, Courage, And Betrayal In The Search For The Source Of The Nile

An epic tale of adventure and exploitation

For millennia, the location of the Nile River’s headwaters was shrouded in mystery. In the 19th century, Richard Burton and John Hanning Speke were chosen to claim the prize for England and extend the country's colonial empires.

Yet there was a third man on both expeditions, his name obscured by imperial annals, whose exploits were even more extraordinary. He was Sidi Mubarak Bombay, a former slave from East Africa. Without his talents, it is likely that neither Englishman would have come close to the headwaters of the Nile, or perhaps even survived.

In River of the Gods, Candice Millard has written a peerless story of courage and adventure, set against the backdrop of the race to exploit Africa by colonial powers.