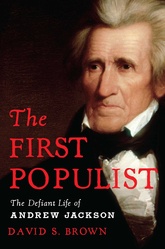 The First Populist: The Defiant Life Of Andrew Jackson

Andrew Jackson rose from rural poverty to become the dominant figure in American politics. His reputation, however, defies easy description. Some regard him as the symbol of a powerful democratic movement that saw early 19th century suffrage restrictions recede for white men. Others stress his prominent role in removing Native American peoples from their ancestral lands, which were then opened to create a southern cotton kingdom, home to more than a million enslaved people.

Presenting a full portrait of a controversial American life, The First Populist offers a new way to interpret Jackson’s legacy, connecting “Old Hickory” to a longer history of division, dissent, and partisanship that has come to define our current times.