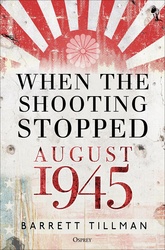 When The Shooting Stopped - August 1945: The Month That Changed The World

Victory in Japan Day (VJ Day) on August 15, 1945, officially marked the end of World War II. However, in reality, the conflict continued throughout the month. This fascinating new history tells the dramatic story of the war's final weeks, detailing the last brutal battles on air, land and sea with evocative first-hand accounts from pilots and sailors caught up in these extraordinary events.

Author Barrett Tillman also details the first weeks of a tenuous peace and the drawing of battle lines for the upcoming Cold War, as Soviet forces concluded their invasion of Manchuria. When the Shooting Stopped expertly retells these dramatic events, drawing on accounts from all sides to relive the days when the war finally ended.