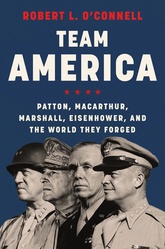 By the first half of the twentieth century, technology had transformed warfare into a series of intense bloodbaths. During this period, four men exhibited unparalleled military leadership that guided the United States victoriously through two World Wars: Douglas MacArthur, George Patton, George Marshall, and Dwight “Ike” Eisenhower; or, as bestselling author Robert O’Connell calls them, Team America.

O’Connell captures these men’s unique charisma as he chronicles the path each forged—from their upbringings to their storied military careers—experiences that shaped them into majestic leaders who would play major roles in saving the free world and preserving the security of the United States in times of unparalleled danger.