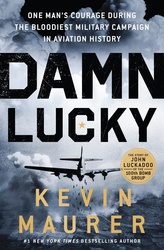 Damn Lucky: One Man's Courage During The Bloodiest Military Campaign In Aviation History

Ruling the skies over Germany

When Japan attacked Pearl Harbor on December 7, 1941, John Luckadoo didn’t hesitate to join the military. Trained as a pilot with the US Air Force, Luckadoo was assigned to the 100th Bomb Group stationed in Thorpe Abbotts, England. With a shrapnel torn Bible in his flight jacket pocket and his girlfriend’s silk stocking around his neck like a scarf, Luckadoo piloted through Luftwaffe machine-gun fire and anti-aircraft flak, while enduring subzero temperatures to complete twenty-five missions.