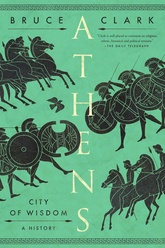 Athens presents one of the most recognizable and symbolically potent panoramas of any of the world's cities: the pillars and pediments of the Parthenon dominate a city whose name is synonymous for many with civilization itself. It is hard not to feel the hand of history in such a place. The birthplace of democracy, Western philosophy and theatre, Athens' importance cannot be understated. Few cities have enjoyed a history so rich in artistic creativity and the making of ideas.

From the legal reforms of the lawmaker Solon in the sixth century BCE to the travails of early twenty-first century Athens, author Bruce Clark brings the city's history to life, evoking its cultural richness and political resonance in this kaleidoscopic history.