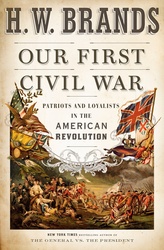 Our First Civil War: Patriots and Loyalists in the American Revolution

A clash of loyalists and patriots

George Washington and Benjamin Franklin were the unlikeliest of rebels. John Adams might have seemed a more obvious candidate for rebellion, being of cantankerous temperament. Yet all three men rebelled against the British Empire. Others in the same circles chose differently. William Franklin, son of Benjamin, remained loyal to the British. So did Thomas Hutchinson, a royal governor and friend of the Franklins.

After the Revolution, the Patriots were cast as heroes and founding fathers, while the Loyalists were relegated to bit parts best forgotten. Our First Civil War reminds us that before America could win its revolution against Britain, the Patriots had to win a bitter civil war against family, neighbors, and friends.