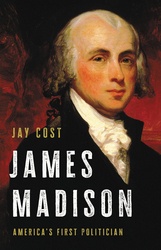 James Madison is one of the most confounding figures in early American history; his political trajectory seems almost intentionally inconsistent. He was both for and against a strong federal government. He wrote about the dangers of political parties in the Federalist Papers and then helped to found the Republican Party just a few years later.

As Jay Cost shows in this incisive new biography, the underlying logic of Madison’s seemingly mixed record comes into focus only when we understand him primarily as a working politician. Whereas other founders split their time between politics and other vocations, Madison dedicated himself singularly to the work of politics. He was, in short, the first American politician.