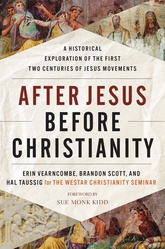 After Jesus, Before Christianity : A Historical Exploration of the First Two Centuries of Jesus Movements

Rethinking the roots of Christianity

Christianity has endured for more than two millennia and is practiced by billions worldwide today. Yet that longevity has created difficulties for scholars tracing the religion’s origins, distorting much of the historical investigation into the first two centuries of the Jesus movement. But what if Christianity died in the fourth or fifth centuries after it began? How would that change how historians see and understand its first two hundred years?

Considering these questions, After Jesus Before Christianity offers a new way of thinking about Christianity and its roots. Exciting and revolutionary, this eye-opening book provides fresh insights into the real history behind how the Jesus movement became Christianity.