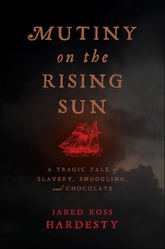 Mutiny On The Rising Sun: The Tragic Tale of Slavery, Smuggling, And Chocolate

A brutal tale of carnage and capitalism

On the night of June 1, 1743, terror struck the schooner Rising Sun. After completing a smuggling voyage where the crew sold enslaved Africans in exchange for chocolate, sugar, and coffee in the Dutch colony of Suriname, the ship traveled eastward along the South American coast. Believing there was an opportunity to steal the lucrative cargo, three sailors snuck below deck, murdered four people, and seized control of the vessel.

Mutiny on the Rising Sun recounts the origins, events, and eventual fate of the Rising Sun’s final smuggling voyage in vivid detail. Starting from that horrible night in June, it narrates a deeply human history of smuggling, providing an incredible story of those caught in the webs spun by illicit commerce.