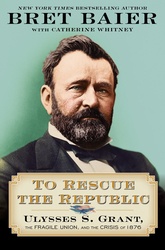 To Rescue The Republic: Ulysses S. Grant And The Grand Bargain Of 1876

A nation on fragile ground

Born a tanner’s son in rugged Ohio in 1822 and battle tested by the Mexican American War, Ulysses S. Grant found his destiny on the bloody fields of the Civil War. Years later, the reunified nation faced a leadership void after Lincoln’s assassination and an unworthy successor completed his term. Again, Grant answered the call. At stake, once more, was the future of the Union.

A riveting history spanning the battlegrounds of the Civil War and the violent turmoil of Reconstruction to the forgotten electoral crisis that nearly fractured a reunited nation, Bret Baier’s To Rescue the Republic dramatically reveals Ulysses S. Grant’s essential yet underappreciated role in preserving the United States during an unprecedented period of division.