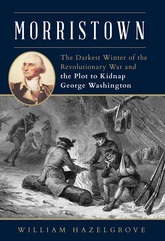 Morristown: The Darkest Winter Of The Revolutionary War And The Plot To Kidnap George Washington

In this extraordinary account, author William Hazelgrove details the brutal months that George Washington and his 10,000 men spent encamped in Morristown, New Jersey.

The winter of 1779 to 1780 was the worst in a century and would mark Washington’s darkest hour. It was during this devastating season that Washington contemplated his army coming apart from six years of war, lack of food, desertions, mutiny, and the threat of a devastating attack by the British. Most incredibly, there was also a plot to kidnap Washington. And yet Morristown would mark a turning point. After a long winter of suffering, he was joined by Lafayette in May who promised Washington a second fleet of French support, leading to the final defeat of the British in 1783.