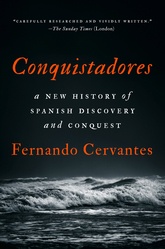 Conquistadores: A History: A New History Of Spanish Discovery And Conquest

Over the few short decades that followed Christopher Columbus’s first landing in the Caribbean in 1492, Spain conquered the two most formidable civilizations of the Americas: the Aztecs of Mexico and the Incas of Peru.

In Conquistadores, acclaimed Mexican historian Fernando Cervantes cuts through the layers of myth and fiction to help us better understand the context that gave rise to the conquistadors’ actions. Drawing upon previously untapped primary sources, Cervantes immerses us in the late-medieval, imperialist, religious world of 16th-century Spain. His thought-provoking, illuminating account reframes the story of the Spanish conquest of the New World and the half-century that irrevocably altered the course of history.