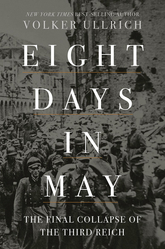 Eight Days In May: The Final Collapse Of The Third Reich

The final days of Nazi Germany

In a bunker deep below Berlin’s Old Reich Chancellery, Adolf Hitler and his new bride, Eva Braun, took their own lives on April 30, 1945. But the Führer’s suicide did not instantly end either Nazism or the Second World War in Europe. Far from it: the eight days that followed were among the most traumatic in modern history, witnessing not only the final paroxysms of bloodshed and the frantic surrender of the Wehrmacht, but the total disintegration of the once-mighty Third Reich.

In Eight Days in May, the award-winning historian and Hitler biographer Volker Ullrich draws on an astonishing variety of sources, including diaries and letters of ordinary Germans, to narrate a society’s descent into complete chaos.