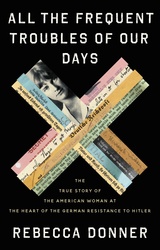 All The Frequent Troubles Of Our Days: The True Story Of The American Woman At The Heart Of The German Resistance To Hitler

All the Frequent Troubles of Our Days is the true story of the extraordinary life and death of Mildred Harnack, the American leader of one of the largest underground resistance groups in Germany, who was executed on Hitler's direct order.

Harnack, a native of Milwaukee, was a student in Berlin during the rise of the Nazi party. Before she was captured, Harnack held secret meetings in her apartment, recruited Germans into the resistance, helped Jews escape, plotted acts of sabotage, collaborated in writing leaflets that denounced Hitler, and became a spy.

A riveting mix of biography, political thriller, and detective story, this powerful book brilliantly reconstructs the moral courage of an enigmatic woman nearly erased by history.