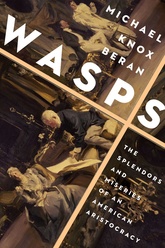 Wasps: The Splendors And Miseries Of An American Aristocracy

Charming, witty, and vigorously researched, WASPS traces the rise and fall of this distinctly American phenomenon through the lives of prominent icons from Henry Adams to Theodore Roosevelt, from George Santayana to John Jay Chapman, from Babe Paley to Edie Sedgwick. Throughout this dynamic story, Michael Knox Beran chronicles the efforts of wealthy White Anglo-Saxon Protestants to use their privileged position to better the world around them, as well as their struggles to break free from their restrictive culture.

Beginning at the turn of the 20th century, Beran’s saga dramatizes the evolving American aristocracy that forever changed a nation—and what we can still glean from WASP culture in the twenty-first century.