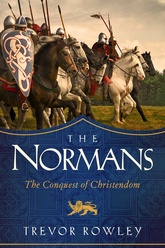 The Normans: The Conquest Of Christendom: A History

The Norman conquest of the known world was a phenomenon unlike anything Europe had seen up to that point in history. They emerged early in the tenth century but had disappeared from world affairs by the mid-thirteenth century. Yet in that time, they had conquered England, Ireland, much of Wales and parts of Scotland. They also founded a new Mediterranean kingdom in southern Italy and Sicily, as well as a Crusader state in the Holy Land and in North Africa.

Drawing on archaeological and historical evidence, author Trevor Rowley offers a comprehensive picture of the Normans and argues that despite the short time span of Norman ascendancy, it is clear that they were responsible for a permanent cultural and political legacy.