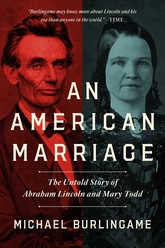 An American Marriage: The Untold Story Of Abraham Lincoln And Mary Todd

Based on thirty years of research, An American Marriage describes and analyzes why Abraham Lincoln had good reason to regret his marriage to Mary Todd. This revealing narrative shows that, as First Lady, Mary Lincoln accepted bribes and kickbacks, sold permits and pardons, engaged in extortion, and peddled influence. Also, the 5’2” Mrs. Lincoln often physically abused her 6’4” husband, as well as her children and servants; she humiliated her husband in public; and she caused him, as president, to fear that she would disgrace him publicly.

In the end, Lincoln may not have had as successful a presidency as he did—where he showed a preternatural ability to deal with difficult people—if he had not had so much practice at home.