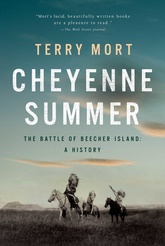 Cheyenne Summer: The Battle Of Beecher Island: A History

Deadly days on the Western frontier

In September 1868, the undermanned United States Army was struggling to address attacks by Cheyenne and Sioux warriors against the Kansas settlements, the stagecoach routes, and the transcontinental railroad. General Sheridan hired fifty frontiersmen and scouts to supplement his limited forces. He placed them under the command of Major George Forsyth and Lieutenant Frederick Beecher. Their orders were to find the Cheyenne raiders and, if practicable, to attack them.

Evoking the spirit—and danger—of the early American West, this is the story of the Battle of Beecher Island, pitting an outnumbered United States Army patrol against six hundred Native warriors, where heroism on both sides of the conflict captures the vital themes at play on the American frontier.