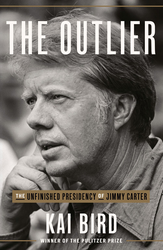 The Outlier: The Unfinished Presidency Of Jimmy Carter

The triumphs and tragedies of Jimmy Carter

Decades after Ronald Reagan’s landslide win in 1980, Jimmy Carter’s one-term presidency is often labeled a failure; indeed, many Americans view Carter as the only ex-president to have used the White House as a stepping-stone to greater achievements. In this deeply researched account, Kai Bird expertly unfolds the Carter saga as a tragic tipping point in American history.

In these remarkable pages, Pulitzer Prize–winning biographer Bird traces the arc of Carter’s administration, from his aggressive domestic agenda to his controversial foreign policy record. Bird shows how issues still hotly debated today—from health care to inequality—burned at the heart of Carter’s America, and consumed a president who found a moral duty in solving them.