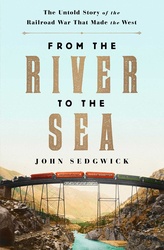 From The River To The Sea: The Untold Story Of The Railroad War That Made The West

The greatest railroad war of all time

In 1869, the first transcontinental railroad had made history by linking East and West, but, relying heavily on federal grants, it also left an opening for two brash new railroad men to make a fortune by creating a railroad empire across the Southwest to the sea.

The two men behind the Rio Grande and the Santa Fe had fought all across the west to lay claim to the routes that would secure the most profitable territory and the richest silver mines. To win them, each side turned hundreds of their train workers into private armies backed by local militia and paid mercenaries. The war left one of the two lines reeling in a death spiral and sent the other on to a greatness unequaled by any other railroad in the world.