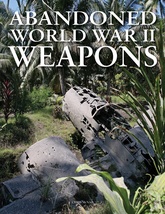 Explore the remains of WWII

More than 75 years after the end of World War II, the conflict's legacy can still be seen from the Arctic wastes to the Solomon Islands of the South Pacific. The six years of war produced a greater number and variety of weapons than any other conflict before or since. This included more than 5 million tanks, armored fighting vehicles, and other self-propelled weapons; 8 million artillery guns; almost a million military aircraft; more than 50,000 ships and submarines; as well as many millions of rifles, machine guns, and handguns.

Illustrated with more than 150 unique photographs, this haunting and informative book allows readers to get up-close to the detritus of the great, destructive conflict in every part of the world.