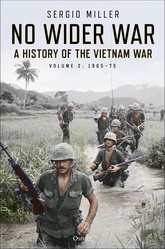 The saga of America in Vietnam

No Wider War is the second book of a two-part exploration of America's involvement in Indochina from the end of World War II to the Fall of Saigon. This highly detailed volume traces the story of America's involvement in the Vietnam War from the first Marines landing at Da Nang in 1965, through the traumatic Tet Offensive of 1968 to the withdrawal of American forces and the final loss of the South in 1975.

Drawing on the latest research, unavailable to the authors of the classic Vietnam histories, including recently declassified top secret National Security Agency material, Sergio Miller examines in depth both the events and the key figures of the conflict to present a masterful narrative of America's most divisive war.