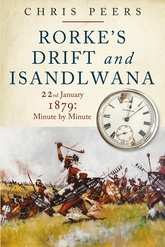 Every minute of an infamous day

The battle of Isandlwana on January 22nd, 1879 was one of the most dramatic episodes in military history. In the morning, 20,000 Zulus overwhelmed the British invading force in one of the greatest disasters ever to befall a British army.

Later the same day, a Zulu force of around 3,000 warriors turned their attention to a small outpost at Rorke’s Drift defended by around 150 British and Imperial troops. The British victory that ensued would go down as one of the most heroic actions of all time.

In this blow-by-blow account, Chris Peers draws on first-hand testimonies from both sides. Along the way, he exposes many of the Victorian myths to reveal great acts of bravery, as well as cases of cowardice and incompetence.