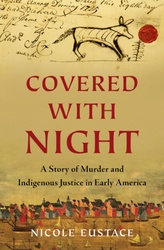 Covered With Night: A Story Of Murder And Indigenous Justice In Early America

On the eve of a major treaty conference between Iroquois leaders and European colonists in the summer of 1722, two white fur traders attacked an Indigenous hunter and left him for dead near Conestoga, Pennsylvania. Though virtually forgotten today, this act of brutality set into motion a remarkable series of criminal investigations that challenged the definition of justice.

In Covered with Night, leading historian Nicole Eustace reconstructs the crime and its aftermath, bringing us into the overlapping worlds of white colonists and Indigenous peoples in this formative period. An absorbing chronicle built around an extraordinary group of characters, this powerful book transforms a single event into an unforgettable portrait of early America.