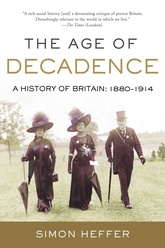 Unrest in the Empire

The popular memory of Britain in the years before the Great War is of a powerful, contented, orderly, and thriving country. Britain commanded a vast empire: she bestrode international commerce. Her citizens were living longer, profiting from civil liberties their grandparents only dreamed of and enjoying an expanding range of comforts and pastimes.

Yet beneath the surface things were very different. In The Age of Decadence, Simon Heffer exposes the contradictions of late-Victorian and Edwardian Britain. Among many other profound examples, he shows how attempts to secure vital social reforms prompted the twentieth century’s gravest constitutional crisis—and coincided with the worst industrial unrest in British history.