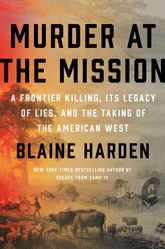 Murder At The Mission: A Frontier Killing, Its Legacy Of Lies, And The Taking Of The American West

In 1836, two missionaries, Dr. Marcus Whitman and Reverend Henry Spalding, were headed to present-day Washington state and Idaho, where they aimed to convert members of the Cayuse and Nez Perce tribes. Both would fail spectacularly as missionaries. But Spalding would succeed as a propagandist, inventing a story that recast his friend as a hero, and helped to fuel the massive westward migration that would eventually lead to the devastation of those they had purportedly set out to save.

Exposing the hucksterism and self-interest at the root of American myth-making, Murder at the Mission reminds us of the cost of American expansion, and of the problems that can arise when history is told only by the victors.