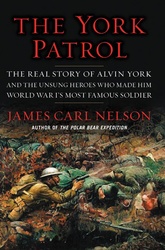 The York Patrol: The Real Story of Alvin York and the Unsung Heroes Who Made Him World War I's Most Famous Soldier

October 8, 1918 was a banner day for heroes of the American Expeditionary Force. Thirteen men performed heroic deeds that would earn them Medals of Honor. Of this group, one man emerged as the single greatest American hero of WWI: Alvin Cullum York. A poor farmer from Tennessee, Sergeant York was said to have single-handedly killed two dozen Germans and captured another 132 of the enemy, plus thirty-five machine guns, before noon on that fateful Day of Valor.

In this absorbing history, James Carl Nelson unspools, for the first time, the complete story of Alvin York and the events that occurred in the Argonne Forest. Illustrated with 25 black-and-white images, The York Patrol is a rousing tale of courage, tragedy, and heroism.