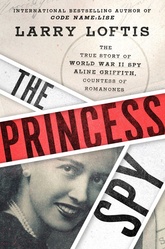 When Aline Griffith was born in a quiet suburban New York hamlet, no one had any idea that she would go on to become one of the most daring spies in WWII before marrying into European nobility.

After joining the Office of Strategic Services, forerunner of the CIA, Griffith was sent to Spain to be a coder, but she was soon given the assignment of infiltrating the upper echelons of society, mingling with high-ranking officials, diplomats, and titled Europeans, any of whom could have been an enemy agent.

Filled with twists, romance, and white-knuckled adventures fit for a James Bond film, The Princess Spy brings to vivid life the dazzling adventures of a remarkable American woman who risked everything to serve her country.