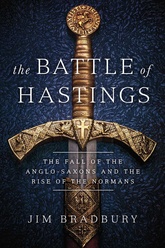 The Battle Of Hastings: The Fall Of The Anglo-Saxons And The Rise Of The Normans

The battle that defined a nation

A rousing historical narrative, The Battle of Hastings takes a fresh look at one of the most significant battles in English history. Author Jim Bradbury explores the full military background of the battle and investigates both what actually happened on that fateful day in 1066 and the role that the battle plays in the British national myth.

This fascinating story starts by looking at the Normans and the career of William the Conqueror before 1066. Next, the narrative turns to the Saxons in England, and to Harold Godwineson and his attempts to unify a divided kingdom.

The core of the book is a move-by-move reconstruction of the battle itself, including the planning, the composition of the armies, and the death of Harold Godwineson.